Hartgen Archaeological Associates, Inc. were asked to perform historical background research and a geophysical survey by the National Park Service of Valley Forge, and in August of 2013, Hartgen Archaeological Associates relied on Radar Solutions International, Inc. and our geophysical expertise to perform the survey. Hartgen and RSI teamed up to complete the geophysical survey of over 2.3 acres of land. The survey area was split into two separate areas; north of the tree line and south of the tree line. These two areas were chosen from pre-existing historical maps that showed human activity. To understand the full extent of the sub-surficial features within this area, RSI used a number of methods; ground penetrating radar (GPR), resistance meter, magnetometer, and electromagnetic conductivity. 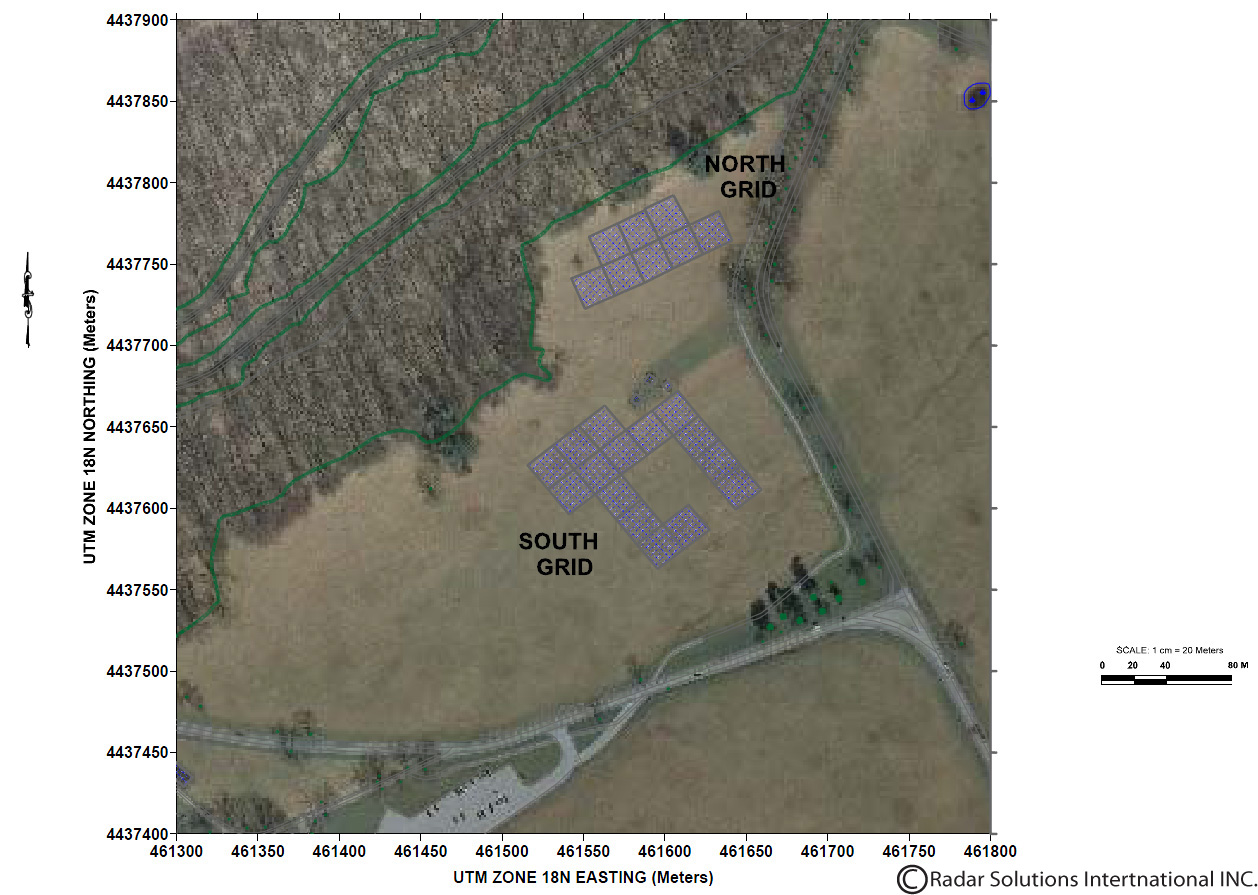 RSI's President and Senior Geophysicist Doria Kutrubes, Geophysicist Amy Ziter and Geophysical Technician Rick Lammey were on site to complete the survey. Accompanying the RSI team was Shaffer Miller from Hartgen and Valley Forge Park Archaeologist Liza Rupp to designate grids and map out the site. Above is a map of the survey area.

RSI used GSSI's SIR-3000 with both 400 MHZ and 900 MHz antennas, which had an average penetration of 7.5 ft. and 4.2 ft. respectively. The GPR data shows a of broad reflectors crossing the site at a variety of depths. There is some possibly that these broad zones are the former roads used for mining. The GPR data is further supplemented by the magnetics and resistivity data sets. 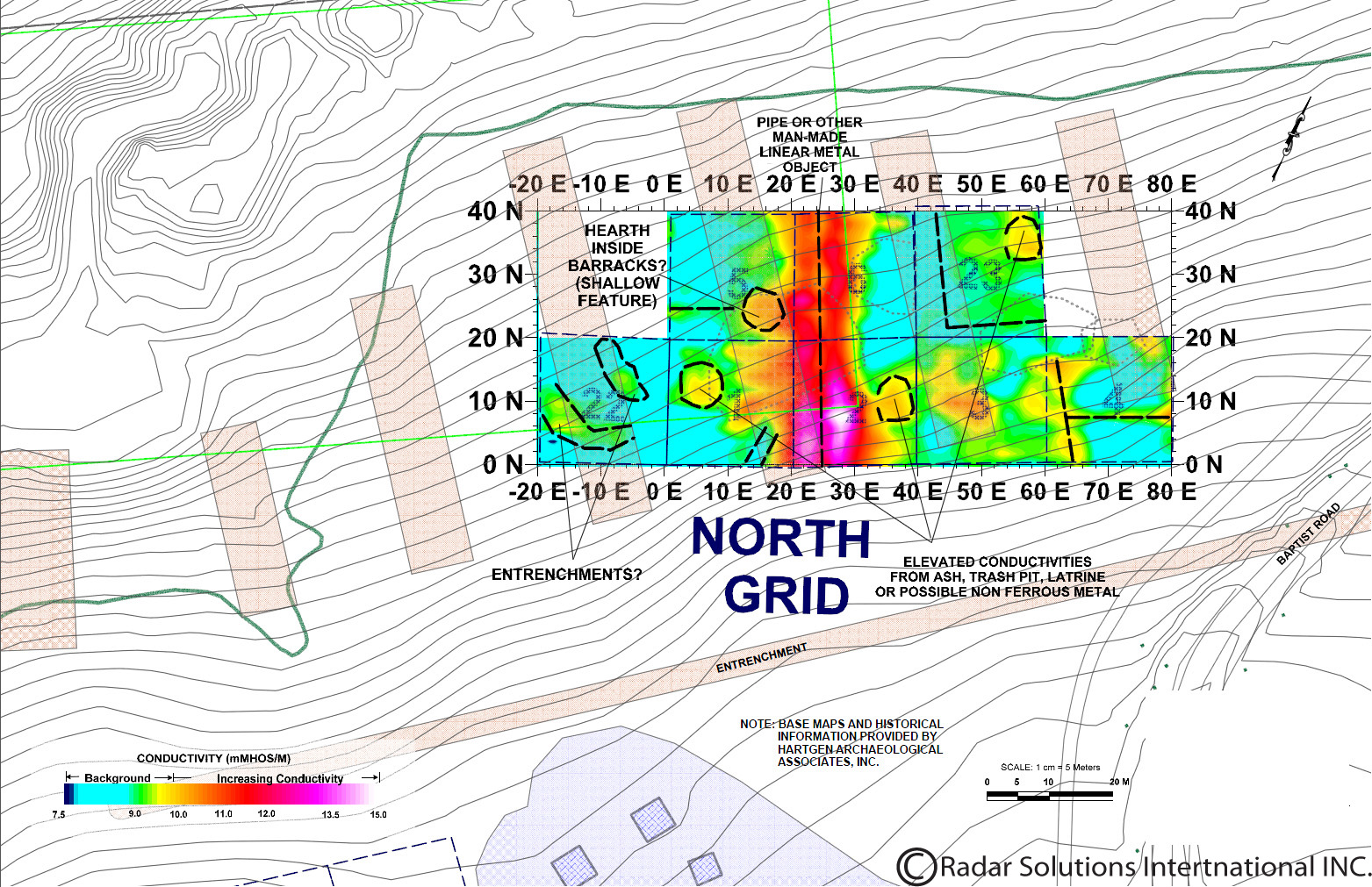 The electrical Resistivity survey was only performed in the northern section of the site due to anthropogenic activity in the southern location (Boy Scout Camp/rifle range), which may throw off any observed anomalies. Like the GPR, the resistivity data shows high conductivity from (18W,20N), (5W, 20N) to (14W, 0N), (0E, 0N) that corresponds to flooring or cobble-filled cellar holes of former huts. The resistivity data also confirmed the location of the easternmost row of huts, which is shown on the map overlay above.

The contoured conductivity data is in strong correlation to the data recorded from the magnetometer. The same piping found in the northern section of the site from the magnetometer is also correlated with the resistivity data. The Magnetometry data also identified a circular low which does correlate to the footprint of the hut, but could potentially be an area of ash, trash pit or latrine. Additionally, we were also able to identify a large conductive anomaly located in the southeast corner of grid 19, which is observed in the magnetometer data as well. 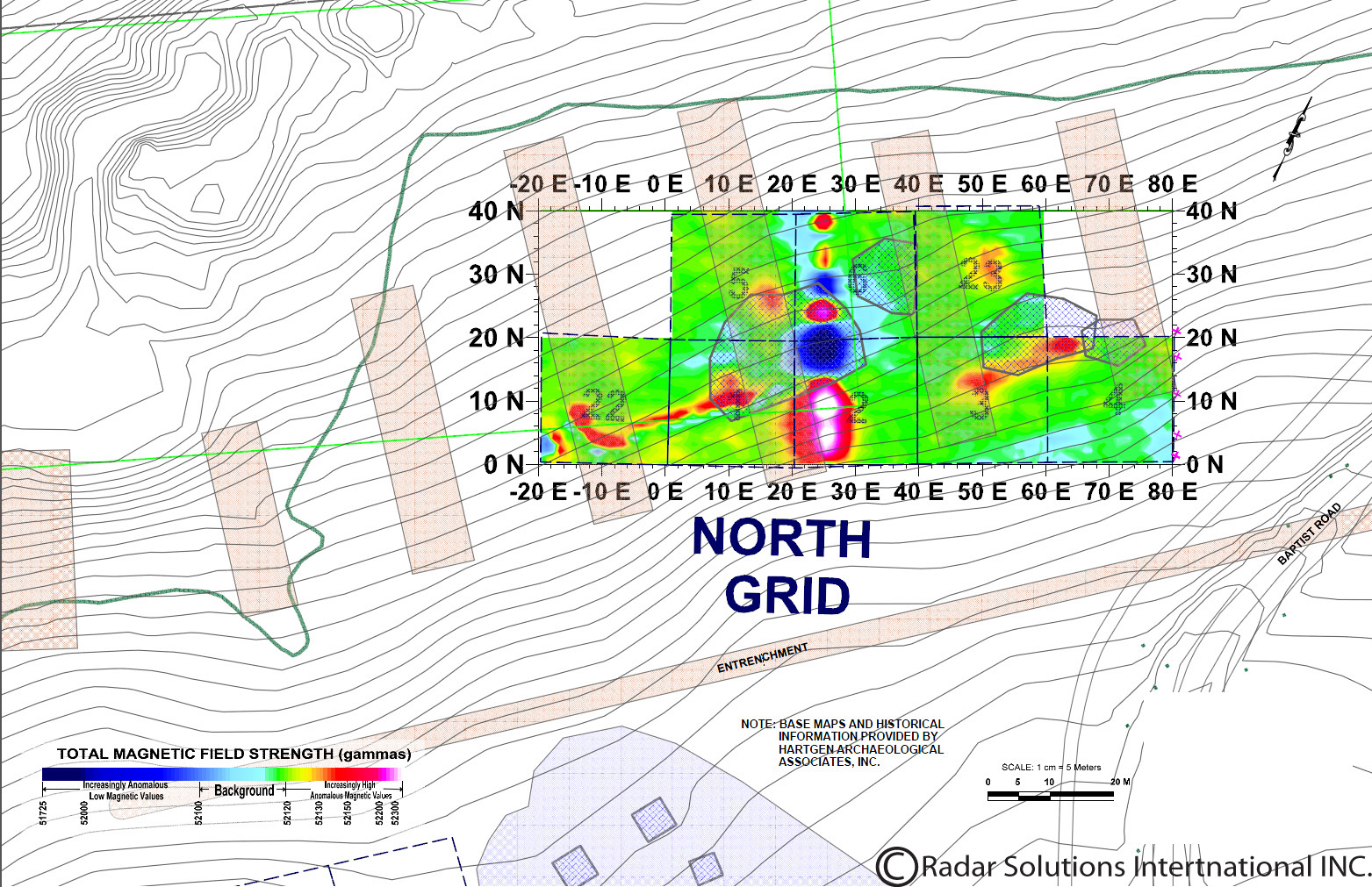 Map overlaid on Magnetometer data of the northern portion of the survey site. 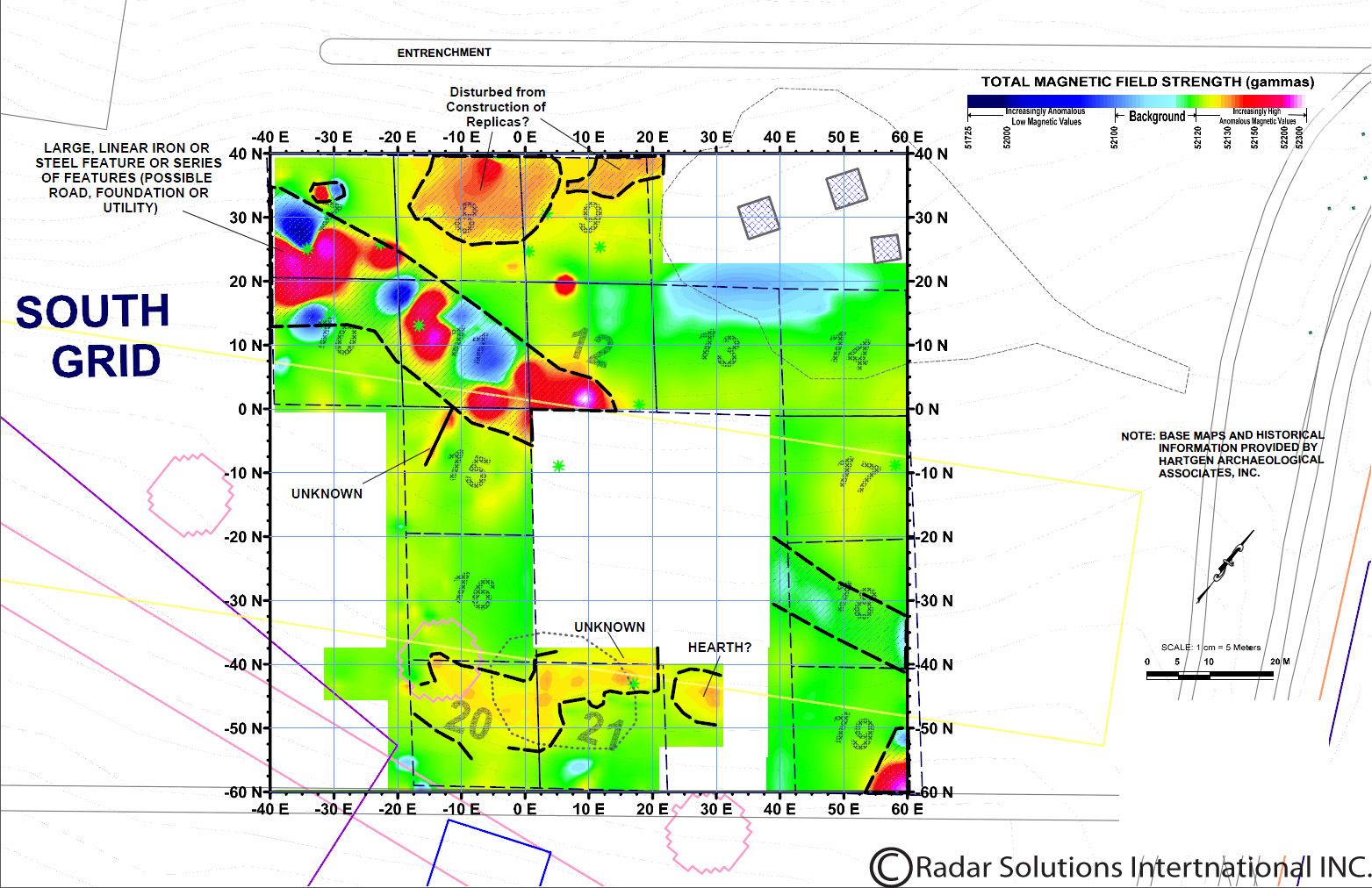 Map overlaid on Magnetometer data of the southern portion on the survey site.

With the use of the Magnetometer we were able to supplement the data obtained from the GPR and Resistivity methods. The Magnetometer data not only identified hearths located between the huts in the northern portion of the survey site, but also recent piping running through area. Furthermore, the Magnetometer was also able to identify the same piping running through the southern portion of the survey site. Using all four of the geophysical survey techniques, RSI was able to locate and identify a number sub-surficial features and provide Hartgen substantial evidence to support their historical records.

Acknowledgements: We would like to thank Hartgen Archaeological Associates, Inc. for all their help to complete this field work, as well as their background information about the survey site. We would also like to thank the National Parks Service at Valley Forge for their help to acclimate us to the site.