The magnetic method works on the principle that ferrous (iron-steel) objects cause localized disturbances (anomalies) in the earth's total magnetic field that are measurable with the magnetometer. Iron or steel objects may be detected to depths as great as 25 feet, depending upon the magnetic mass of the target(s) in question and the type of magnetometer used. The greater mass, the larger the disturbance recorded in the earth's field. A single metal drum buried about 4 feet below grade may produce an anomaly of 60 to 200 gammas. A nest of 10,000 drums can produce anomalies in the order of several thousand gammas.

The proton precession total field magnetometer has a sensor filled with decane that is mounted vertically on an 8-foot high aluminum pole. As a measurement is taken, an electric field is applied to the sensor, and the molecules within the sensor are polarized and orient themselves towards the applied field. A magnetic gradiometer has two total field sensors within it. Both sensors measure the earth's total magnetic field to determine the presence of metal. When a magnetic reading is taken, an electric field is applied to within the magnetic sensor. The protons within the sensor (or in the instance of the walking magnetometer, the cesium gas within the sensor) align in response to the applied electric field. The rate at which the protons (or cesium gas) return to their natural state and re-align with the earth's magnetic field is proportional to the earth's total magnetic field measured at that precise location. In the absence of buried iron or steel objects, the magnetic gradient (or the change in the magnetic field from one station to another is negligibly small. However, when there are buried steel and iron objects, such as underground storage tanks, drums, and utilities, the magnetic field gradient is very large. RSI digitally records and contours total field (and gradient) measurements to help pinpoint buried metal objects. For total field measurements, it may be necessary to correct for daily fluctuations in the earth's total magnetic field (called diurnal variations), depending upon the magnitude of the target for which one is searching.

Magnetic data may be adversely impacted by the presence of above-ground sources of noise, such as overhead power lines, cars, dumpsters, and buildings. Cellular phones, walkie-talkies, and nearby radio broadcasting stations can also create significant disturbance in the earth's magnetic field. Electrical storms, solar flares and magnetic storms, are natural sources of noise which may create unreliable magnetic data. In addition, when processing magnetic data, the operator must account for the diurnal or daily changes in the earth's magnetic field. Typically, diurnal fluctuations are on the order of 30 gammas or less, depending upon the amount of solar flares or magnetic storms. The effects of diurnal variations may be removed from the data by establishing a base station in an area free of metal, and recording magnetic values at a minimum of 1-hour intervals over the duration of the field survey. If the survey area is sufficiently large, or there is a lot of solar flare/ magnetic storm activity, a remote base-station may be set up to automatically record the earth's magnetic field at 1 minute intervals.
‍ 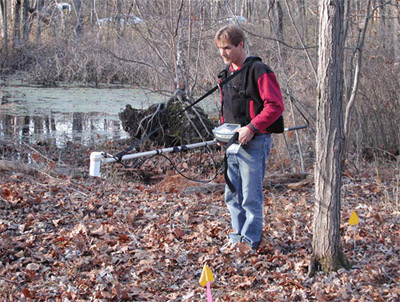